'Come along and join the feelgood choir' 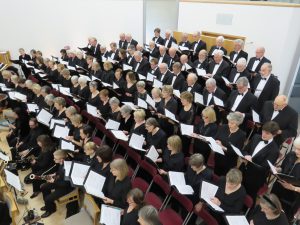 We welcome keen singers of all ages and voice parts – no auditions are required, although enthusiasm and commitment are expected!

Please see Information for Members for updates on our plans.

We meet during school time for three terms from September through to June. Rehearsals are held from 7.45pm to 9.30pm on Tuesday evenings at the Falkland Islands Memorial Chapel, Pangbourne College.

We offer members three choices for length of membership per year:

New members are given the opportunity to attend two rehearsals before committing.

In addition to singing within the choir from time to time we offer opportunities for members to sing solo parts or in semi-choruses. For example, during our regular Christmas Carol Concert or in performances like Dido and Aeneas in 2015.

Although most performances are at the Falklands Chapel from time to time we perform elsewhere including Douai Abbey and Reading Concert Hall, where we have performed Verdi’s Requiem and Mahler’s 2nd symphony.

The music scores we use are either purchased by members or hired. After each concert we have a fun social evening rubbing out scores, discussing our performance and enjoying a chance to catch up (with suitable refreshments).

Although we sing from scores, there is no requirement to be able to read music fluently. However, you will find that you will ‘learn by doing’.

Whilst half our members have been with us for more than ten years, about 30% joined in the last five years. Some take a break to do other things but quite often they return when time allows.

Our members come from across West Berkshire and Southern Oxfordshire including Woodcote, Earley, Thatcham, Chieveley, Cholsey and Caversham.

If you are interested please contact our membership secretary Maggie Harvey or complete the form at the bottom right of this page. Completion of this form will add your name to our database so that you can receive regular emails and implies acceptance that we can hold your data under the terms of our privacy policy

When we meet again in our usual way you could pop along to any rehearsal (suggest you arrive at 7.30pm to sort out a little paperwork and arrange some introductions). It would be helpful if you could contact us beforehand.

When available our latest membership form can be downloaded.

We use cookies on our website to give you the most relevant experience by remembering your preferences and repeat visits. By clicking “Accept All”, you consent to the use of ALL the cookies. However, you may visit "Cookie Settings" to provide a controlled consent.
Cookie SettingsAccept All
Manage consent

This website uses cookies to improve your experience while you navigate through the website. Out of these, the cookies that are categorized as necessary are stored on your browser as they are essential for the working of basic functionalities of the website. We also use third-party cookies that help us analyze and understand how you use this website. These cookies will be stored in your browser only with your consent. You also have the option to opt-out of these cookies. But opting out of some of these cookies may affect your browsing experience.
Necessary Always Enabled
Necessary cookies are absolutely essential for the website to function properly. These cookies ensure basic functionalities and security features of the website, anonymously.
Functional
Functional cookies help to perform certain functionalities like sharing the content of the website on social media platforms, collect feedbacks, and other third-party features.
Performance
Performance cookies are used to understand and analyze the key performance indexes of the website which helps in delivering a better user experience for the visitors.
Analytics
Analytical cookies are used to understand how visitors interact with the website. These cookies help provide information on metrics the number of visitors, bounce rate, traffic source, etc.
Advertisement
Advertisement cookies are used to provide visitors with relevant ads and marketing campaigns. These cookies track visitors across websites and collect information to provide customized ads.
Others
Other uncategorized cookies are those that are being analyzed and have not been classified into a category as yet.
SAVE & ACCEPT